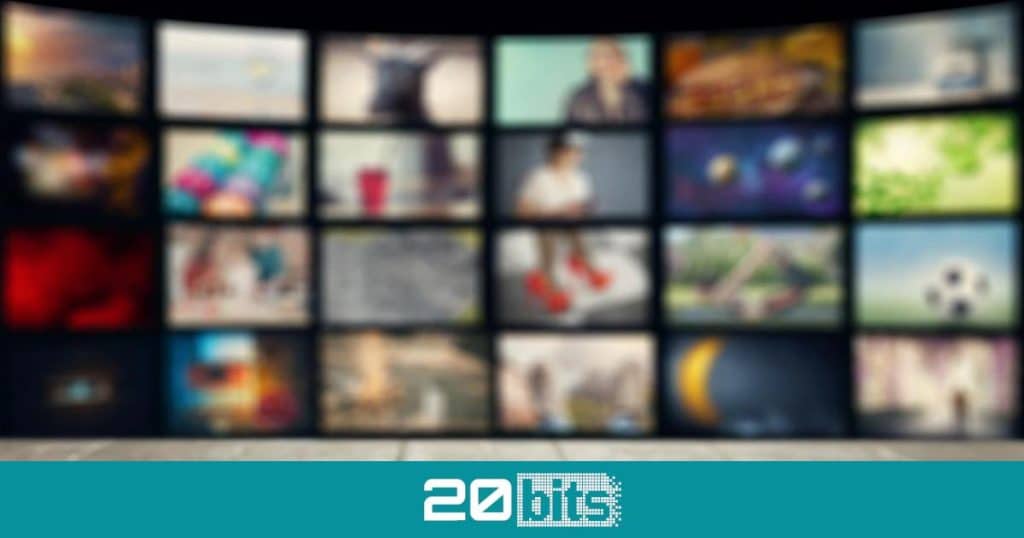 The Italian State Police has reported on a major action “against audiovisual piracy” called ‘Operation Gotha’. As detailed on the official website of this organization, “numerous searches and seizures” have been carried out in 23 provinces of the country and “70 people are under investigation for a criminal association of a transnational nature aimed at broadcasting television schedules with conditional access These people, they add,They must also answer for another series of crimes As the money launderingfraudulent transfer of assets, identity theft, possession and fabrication of false identity documents, misuse and falsification of payment instruments other than cash”. yes, but for the ways in which it has been carried out: the State Police itself affirmed that the investigations had been carried out “from the constant monitoring of Internet”.In their justification, they said that This type of surveillance was aimed at “combatting cybercrime” and has allowed “discovering the existence of an organized criminal association in a hierarchical way according to different and very specific roles (boss, assistant boss, boss, administrator, technician, reseller), whose creators were distributed throughout the country (Catania, Rome, Naples, Salerno and Trapani) and abroad in England, Germany and Tunisia.” The organization, the statement continued, specialized in “the distribution to a large number of users, both nationally and internationally, of live programming and on-demand content protected by television rights, owned by the best-known television platforms, through the illegal IPTV system.” According to reports, the network had 900,000 users -“70% of illegal national streaming”- and the benefits found “only in the months of investigation” are around 10 million euros, “but the damage to the audiovisual industry could amount to more than 30 million euros per month.”

In the operation “the illegal flow of IPTV to users was prevented” and during the raids “numerous computer equipment and illegal devices were seized for connections and transmission activities in streaming”.In the note, the Police emphasizes that “in this phase the investigation affected only those who held senior management positions in the organization, as well as the resellers of TV packages”, but they warned that “the users of the illegal services would be identified later”. It seems that this ‘after’ situation is already here: according to TorrentFreak, a total of 1,600 letters have been sent to different users who were identified as IPTV channel subscribers, prosecuted by Italian law. The letter points to a fine of 154 euros or in case of recidivism of up to 1,032 euros. Although it is possible to pay in advance, within 60 days, and reduce the fine to 51 and 344 euros respectively. 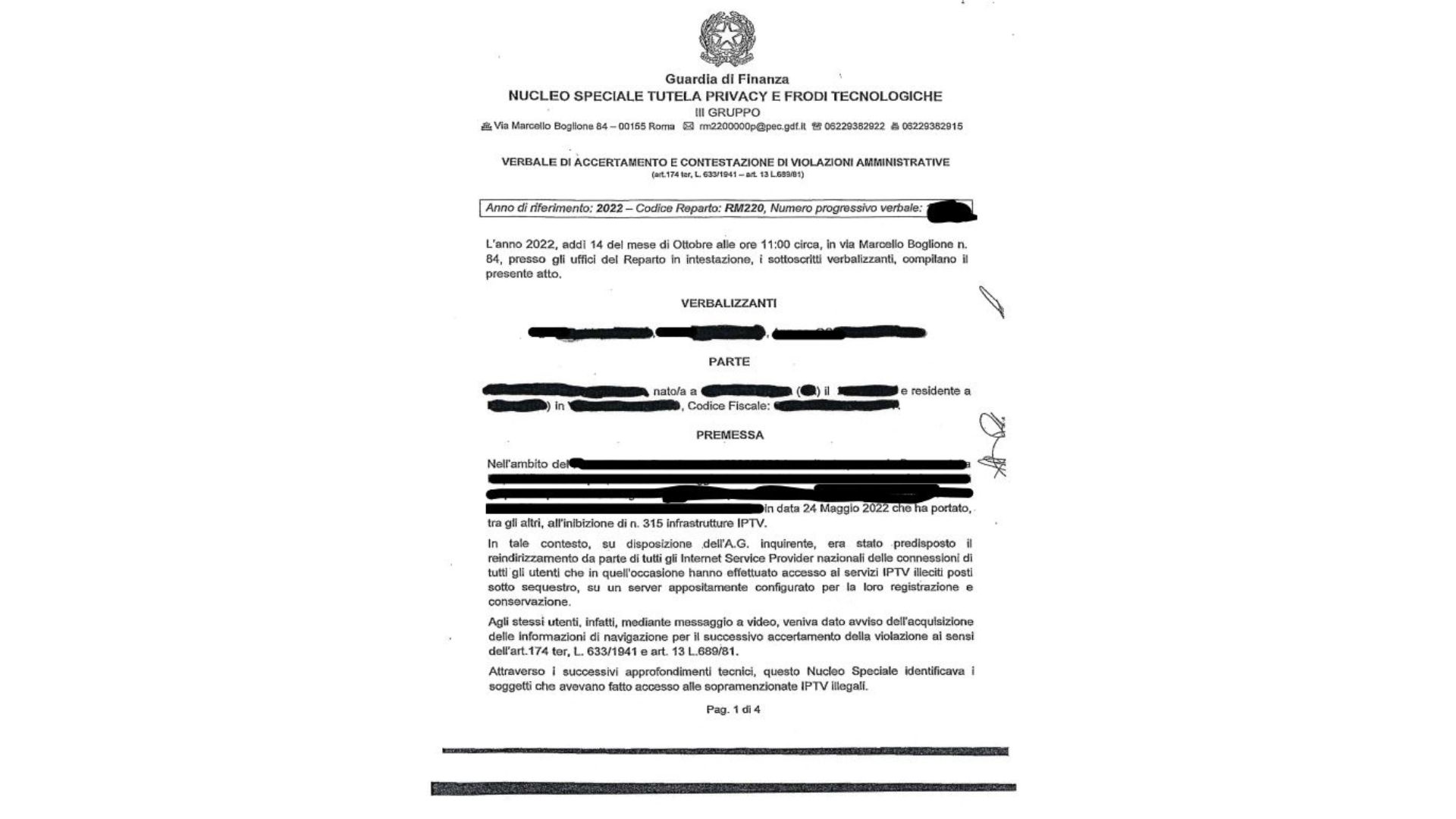 Image of one of the fines for users of IPTV.TorrentFreak services

Is the monitoring of users carried out by the Italian police legal?

“The monitoring carried out by the Italian police has been carried out within the legal framework indicated in that country”, affirms Antonio Ángel Cardador Rodríguez, partner of the firm Cardador y Marín Abogados, a firm dedicated to Digital Law and New Technologies. And he emphasizes: “To this end, with respect to the sanctioning law, each country establishes its own regulation and regulatory framework.” In this case, he clarifies, the notifications received by users who registered in this IPTV infrastructure have been sanctioned not by judicial means, but by administrative meanswhich is based on the ‘Legge di depenalizzazione dated 11/24/1981 no. 689’, which in its article 13 provides:

[…] The bodies in charge of monitoring the observance of the provisions for non-compliance with an administrative sanction of payment of a sum of money may, in order to verify the infringements of their competence, collect information and proceed to inspections of things and places other than those private homes, to surveys of signs, descriptive and photographic and to any other technical operation […].

On the other hand, the expert continues, “the Italian Constitution does not expressly include the right to data protection, but rather the right that no one may be punished, except by virtue of a law that entered into force before the act was committed.” ”. “In this case, what is surprising is not that they have acted in accordance with the law, but that in the face of small sanctions such a complex and structured police raid has been deployed”, says the lawyer.

Could the same thing happen as in Italy in Spain?

Regarding the possibility that users in Spain are fined for this type of behavior on the Internet, the expert reassures and affirms that “something similar could hardly happen in Spain if it is not with the intervention of the judicial authority, since such intervention would affect fundamental rights enshrined in the Spanish Constitution, among others that of art. 18 EC which indicates the following: The law will limit the use of information technology to guarantee the honor and personal and family privacy of citizens and the full exercise of their rights”. However, it points out that there are precedents for judicial authorizations, such as the last August, where Barcelona Mercantile Court No. 9 authorized Movistar Plus and the League to block weekly IPTV broadcast content. In these cases, all the measures to be carried out are carried out in order to protect the rights of Intellectual property. This can be done either with measures in the commercial judicial field or through criminal proceedings, which is usually more common for the specific case of activity at hand.The Penal Code considers the broadcast of content subject to intellectual property rights through unauthorized IPTV platforms as a crimeand especially punishes both the person and service providers in the information society that “with the intention of obtaining a direct or indirect economic benefit, and to the detriment of a third party, actively and non-neutrally facilitate and without being limited to a purely technical treatment, access or location on the Internet of works or services subject to intellectual property without the authorization of the holders of the corresponding rights or their assignees, in particular offering ordered and classified lists of links to the works and contents referred to above , even though said links had been initially provided by the recipients of their services”. This can reach imprisonment of up to six years, a fine of eighteen to thirty-six months and special disqualification for the exercise of the profession related to the crime committed for a period of two to five years.

In comments to Iilsole24ore, Gian Luca Berruti, head of investigations at the Guardia di Finanza, describes the operation as “decisive” in the fight against cybercrime. Currently at Italy’s National Cybersecurity Agency, Berruti refers to “innovative investigative techniques” backed by “new technological tools.” Last May, Italian police announced that thousands of users had subscribed to an IPTV service that , lacking permissions from copyright holders, was being monitored by the authorities. When users tried to access the broadcasts of this, a warning message stated that they had already been tracked. It was later that the fines began to arrive in the form of letters, explaining how it was possible to carry out this large-scale monitoring and identification work. : carried out “the redirection of all national connections of Internet service providers” so that subscribers register and carry out the purchase process on a server controlled by the police and configured to record their activity. In this way, they tracked “in real time” all the connections to the “pirate sites” intervened in the police operation and crossed that information with that derived from the payment mechanisms used to pay for the ‘subscriptions’.“We are facing a conflict between the intellectual property rights of the providers and the privacy of the users. As far as we know, the Italian authorities massively tracked user IPs – whose data is controlled by internet operators, which are the same ones that provide licensed IPTV – and crossed them with data such as user payment methods. This type of tracking can violate the right to privacy of users, but ultimately it will be the Courts who decide which right prevails”, comments María Cerviño, head of the Technological Law and Startups Area at Vento Abogados y Asesores. Cerviño mentions that In Spain we had a precedent with the LaLiga App, which activated the geolocation and microphone of users’ phones to check if they were watching games in bars that did not have a license. By this practice, the AEPD (Spanish Agency for Data Protection) sanctioned LaLiga with 250,000 euros and this sanction has been judicially confirmed by the National Court in May of this year on the understanding that the privacy of the users was violated.

Who is behind the pirate network

According to recent estimates published on the TorrentFreak portal, 23% of the Italian population – around 11.7 million people – illegally consume live television.In the specific case of the ‘Operation Gotha’, it is known that more than 500 IPTV channels and Telegram channels have been tracked, of which more than 310 have been blocked. “The first investigations highlighted the presence in Telegramon various social networks, on various bot sites, channels, groups, accounts, forums, blogs and profiles that advertised the sale in the national territory of accesses for the illegal streaming of paid content via IPTV of the best-known platforms”, The State Police pointed out. They do not specifically name any IPTV service, but a video released by this state authority seems to confirm that at least one of the target locations contained banks of Sky decoders from which the broadcasts would have been received, captured and then rebroadcast to other locations for further distribution.

What is an IPTV?

An IPTV – acronym in English for Internet Protocol Television, that is, Internet Protocol Television – is a platform that allows you to watch television channels over the Internet. It’s a different type of streaming than popular platforms like Netflix, Amazon Prime Video either HBObut which is legally used in Spain by some operators such as Movistar. Thus, instead of receiving the broadcast of the television channel by antenna, satellite or cable, it arrives to you by live streaming or on demand through the web. What IPTV does is create a private and direct network between the operator that offers the channels and the user, so that you can receive these channels without connecting to the Internet just by having the router or decoder turned on. The channels are transmitted on demand , and the operator reserves part of your bandwidth for IPTV. However, there is another way to access them: it is through the IPTV lists, which allow access to many of these channels without the need for an operator. This is where illegal retransmissions come in, in which an IPTV user is recoding and transmitting the signal that reaches him. Sign up for our newsletter and receive the latest technology news in your email.