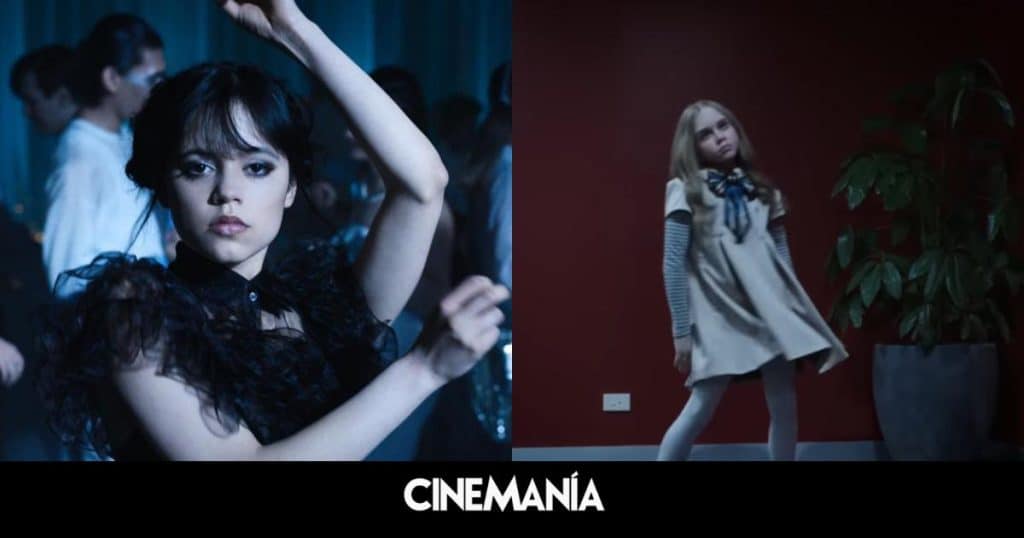 Today it is already used for everything, but the growth of TikTok outside of China as a social video network exploded thanks to a simple premise: see people dancing Dance challenges were born from the videos of invented choreography, very easily viralized by imitation, and from there to maximum growth. Naturally, Hollywood has managed to take advantage of the app by following the same strategy.Wednesday gave us the first clue. The series about the daughter of the Addams family starring Jenna Ortega has been one of Netflix’s most overwhelming hits; its numbers continue to increase and it is already the third most watched series in the history of the platform, just below The Squid Game and the fourth season of Stranger Things. How did you achieve that success? Among the factors to take into account, the striking dance of the protagonist in the fourth episode must be considered very strongly.Inspired by Siouxsie Sioux, Bob Fosse, Lisa Loring, Lene Lovich, Denis Lavant and a covid infection, Jenna Ortega created the key scene that propelled the series to infinity… with a little help from the internet, and specifically from TikTok. That’s where the dancing Wednesday clip went viral. But not the subject of The Cramps that sounds in the series, but a smurfed version of Bloody Mary, from Lady Gaga. Such was the link between the delirious movements of Wednesday and the song by Lady Gaga that propelled it to the top of the charts, the artist herself reacted to the phenomenon and Netflix has used it as an anthem to announce the renewal of a second season. Let’s remember that the theme itself does not even appear or be heard in the series, it was an entirely cooked up phenomenon on TikTok. Each person who duplicated the dance at her house contributed to making Wednesday known to an audience that might not otherwise have seen the series.

Thus we come to M3GAN, the new horror movie with a murderous doll involved that has uncorked the US box office with 30 million dollars (already double its budget) and already accumulates 45 million dollars in worldwide revenue (1.1 million euros from Spain, where it was third in its first weekend). An undoubted success that since blumhouse and the Atomic Monster of james wan they are going to squeeze conscientiously with future sequels.

how has it become M3GAN in the first great phenomenon of 2023 as soon as the year began? The director’s bet gerard johnstone for unprejudiced and pleasant fun with the antics of the electronic doll that is dedicated to liquidating people has a lot to do with and is linked to the good results of recent horror titles that have made unprejudiced entertainment their biggest claim (the case of Smile the year past, for example) and gender the strongest bet at the post-pandemic box office.In addition, as also happened with Smile, in the case of M3GAN we must add a major promotional campaign focused on viralization on social networks to capture the youthful audience of generation Z. With very good results, in view of the data. Since Universal Pictures sought to connect with younger viewers through various highly segmented actions, such as a spot that was played on YouTube in front of the video clips of Bad Bunny.However, what catapulted the presence of M3GAN on the internet was another type of claim: viral dances As soon as the first trailer for the film was released, a few moments in which the murderous doll is seen waddling its mechanical body immediately caught the attention of netizens. Universal knew that this was going to happen and had an arsenal of material prepared. to take advantage of it. A troupe of dancing M3GANs were present at the premiere of the film and walked through different key points in large cities: the roof of the Empire State, the New York subway, the recordings of the shows of Jimmy Fallon Y Jimmy Kimmel, the latest Los Angeles Rams football game and even some of the first sessions in movie theaters like the legendary Chinese Theater. The objective, achieved, was clear: to viralize videos of those moments through social networks.It was clear that they wanted to bring the M3GAN dance to TikTok, for which a sufficient number of videos had to be generated for the trend to catch on organically. According to data published by Deadline, the cutout of the doll’s dance that Universal itself extracted from the trailer managed to more than 250 million views. You could immediately see how it was the element that attracted the most attention in the hashtags spread across YouTube, Twitter, TikTok and gif repositories such as GIPHY. It’s easy to imagine an unstoppable parade of M3GANs penetrating the retinas of millions of people.Best of all is that M3GAN’s dance doesn’t even matter that much in the movie. The doll executes it before dispatching one of its victims when a song from the skatt bros as if it were part of his disturbing movements, but it is simply an element that adds bewilderment and an extra dose of joy to the scene in question. It is undoubtedly a memorable detail, but its exploitation as a claim for the film could not be more circumstantial. “M3GAN isn’t even a dancing doll!” some purist might exclaim. But, for marketing purposes, it was the killer doll image that could have been most effectively used as a promotional tool. Viral dances travel well through networks, especially among younger users, and an enjoyable horror film (with light blood: not recommended for children under 13 years of age) is in this adolescent audience where it has its potential viewers. As it happened with Wednesday, it has reached them using their own language. The language of the dance Who dares to promote a revival of Beau travail, by Claire Denis, using the same technique with a paper clip Denis Lavant? Would Bergman’s Island, from Mia Hansen Leithergo if it had gone viral Mia Wasikowska dancing ABBA? will we see James Cameron incorporate a little TikTok choreography into Avatar 3? It’s on time. Do you want to be up to date with all the latest movies and series? Sign up for our newsletter.