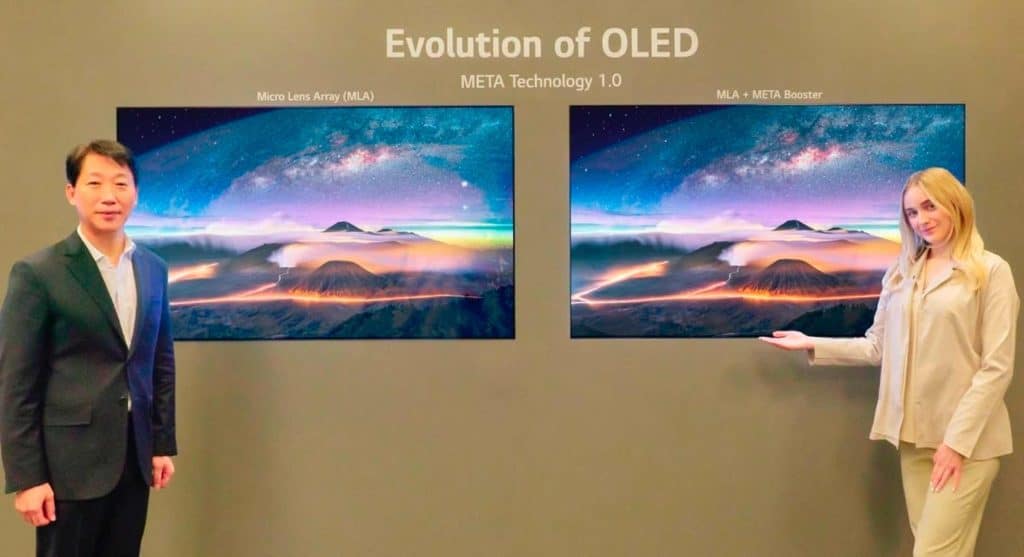 This week, both LG and Panasonic announced new OLED televisions that use the MLA (Micro Lens Array) technology. This technique has been incorporated into the third generation of LG Display panels and for the time being it only concerns 55-inch, 65-inch and 77-inch 4K panels. 8K panels of 77-inch and 88-inch will also receive the new technology. Simply put, the MLA (Micro Lens Array) technology stands for minuscule lenses that ensure that the light emitted by the pixels is better focused towards the viewer and no longer reflected in the television. Together with a new ‘META Booster’ – an advanced algorithm – this should ensure a significantly higher brightness. An exact number cannot yet be attached to this, since LG Display talks about a maximum of 2100 nits, Panasonic showed 1500 nits during its demonstration and LG (of the TVs) talks about 1800 nits. The fact is that we can expect more brightness than last year’s panels.

Micro Lens Array is a layer of micrometer-sized convex lenses that maximizes light emission from the OLED panel and enhances energy efficiency by 22 percent compared to that of the same brightness. With this technology, LG Display became the first panel maker to resolve the lingering issue of light being reflected back into the panel and being lost, which restricted the maximum brightness

LG Display also indicates that MLA ensures that the image can be viewed in high quality from 30 percent wider viewing angles. OLED already had no problem with that, but now you can really sit on your television at an angle, without sacrificing quality. Finally, energy consumption by MLA must have decreased by 22 percent compared to the previous generation of panels, looking at the same brightness. At the moment, Panasonic and LG have announced televisions that have the new MLA OLED panels. Panasonic comes with the new MZW2004 series and LG places the panels in the new G3 series.

Samsung launches second generation The Freestyle and The Premiere projectors