Tips on the open-plan kitchen 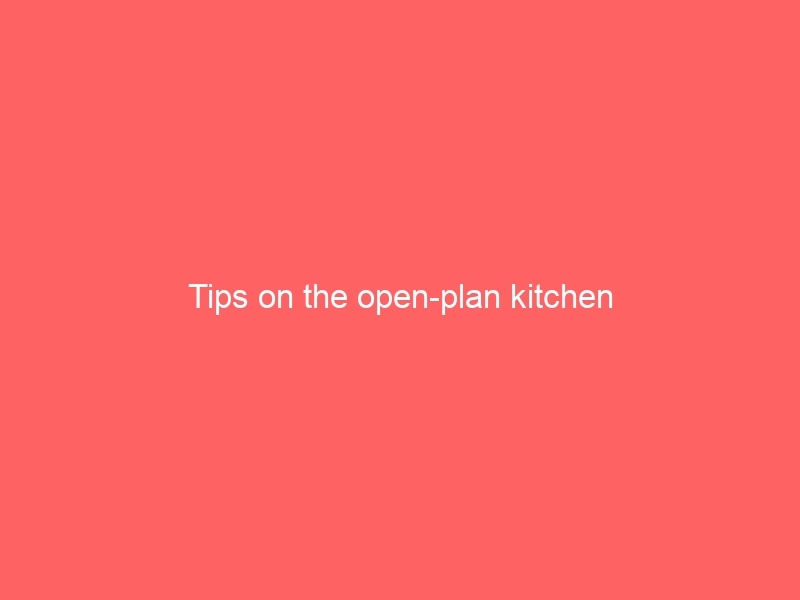 Studio apartments were elaborated in America in the 20s of the last century. The idea of open planning enchanted the entire Western world. The open-plan kitchen is the principle of organizing a living space, in which the kitchen shares one room with the living room.

In the wave of the recent fashion for the loft-style, which came from the same America, and the Scandinavian space, which does not like extra walls, it has become popular to combine kitchens with living rooms through redevelopment. Soon the market adapted to the demands: today more and more new buildings with ready-made Kitchen living rooms are rented out. The interior design is also adapting, offering trendy ways to create a harmonious space that combines two functional areas. We have collected the TOP 5 current trends in the design of the kitchen-living room.

Where is the kitchen?

Kitchens that share space with the living room turn into either inconspicuous roommates or a visual continuation of the living part of the interior. This trend has been around for more than a year and so far it is only strengthening its positions.

Kitchen facades tend to visually dissolve, disguised as the color of the walls, or make them look like living room furniture as much as possible.

One of the variants is choosing modern minimalist facades that perfectly cope with the task, which discards everything originally kitchen: panels, display cabinets, even handles.

Another variant is not necessary to choose functional minimalism: if the living area is decorated in a classic style, the kitchen can be a match for it, while noble materials, a non-standard shade of facades for the kitchen, and not kitchen decor will help mimic the living area.

On open kitchen shelves, you can arrange photos and flower pots, hang a mirror over the sink (now you will know with what face you wash dishes), place pictures above the work surface.

Wanting to visually merge the kitchen with the living room, the main thing is to avoid utilitarian kitchen elements: the refrigerator and all household appliances should be built-in, kitchen utensils, spices, and other bottles should not be left in sight.

The power of contrasts

The trend for color-blocking in the interior in the next few years promises to only get stronger. Bold combinations of saturated color blocks gained popularity on the fashion catwalks, and then came to apartments. Rather returned. This technique was already popular in the 80s of the last century, and even earlier during the Bauhaus school.

Bold and effective color-blocking in kitchen-living rooms makes it possible to visually play with the geometry of the room, highlight certain fragments with the help of color and divert attention from others, and as a result, add up an interesting and harmonious “picture”.

You can use this technique either for the walls or for furniture. Furniture meridian for example has a lot of products in bright and lush colors.

This technique is actively used by designers when they want to divert attention from the functional purpose of the kitchen area, making it a visual part of the residential interior.

Another way to take away the identity of the kitchen is to abandon the top row of cabinets. This trend also allows you to visually unload the space, which is especially important for small-sized kitchen-living rooms.

The complete rejection of the upper tier of the kitchen set is a visually advantageous solution with obvious practical disadvantages. This is a trend for those who easily get by with a minimum of dishes, do not collect cereals and pots, and, in principle, do not often use the kitchen for its intended purpose. Not for cooks.

You can compromise and give up only part of the cabinets, and you can also replace them with open shelves, which are gradually gaining popularity, despite the fact that this decision is accused of being impractical.

Why join if you can not join

For the kitchen area, we try to choose the most practical flooring that is not afraid of dirt, moisture, and accidental encounters with fallen cutlery, while for the living room, as a rule, we choose a traditional parquet board or laminate. Coverings are joined where one room ends and another begins. It is more difficult with kitchen-living rooms: the kitchen area has to be allocated with a tiled “carpet” or at least a strip of tiles next to the set, which will have to take on all the household load. The main thing is to come up with a beautiful way of joining different floor coverings. Or refuse to connect at all.

Another popular solution for this type of living room is a single floor covering for the entire room, which visually increases the size of the room.

In order not to bother with the thresholds, you can choose a single wear-resistant material. Quartz-vinyl tiles are well suited for this role, which can realistically pretend to be a wooden floor, and porcelain stoneware: according to fashion trends, it now lives not only in bathrooms and kitchens but also in living areas, usually in tandem with an underfloor heating system.

Landing on the island

The kitchen island is a neutral land, a transitional element between the kitchen and the living room. It can take on not only the role of a workstation but also a dining table. At the same time, the ends of the kitchen island can be remade by placing bookshelves on them, this will visually make the island related to the living area.

A kitchen island is a trendy alternative to a bar counter. However, the latter has an undeniable advantage – it is not so demanding on the room space, while the island requires a minimum of 90 centimeters, which should separate it from the walls on all sides. The keyword here is “minimum”.

If the space allows you to install a kitchen island, try placing the sofa “backward” to it, abandoning the habit of arranging upholstered furniture along the walls. Such zoning looks very organic.

Following the trends, the main thing is not to forget about ergonomics and your own habits. If work is in full swing in the kitchen all the time, it hardly makes sense to make it a visual continuation of the living room.

Mobile Casino Games Are Receiving Increased Traffic: Why Is It So Popular?

AN OWN CRYPTOCURRENCY FOR AMAZON IN 2022