Riverdale Season 5: Betty Is A Murderer! 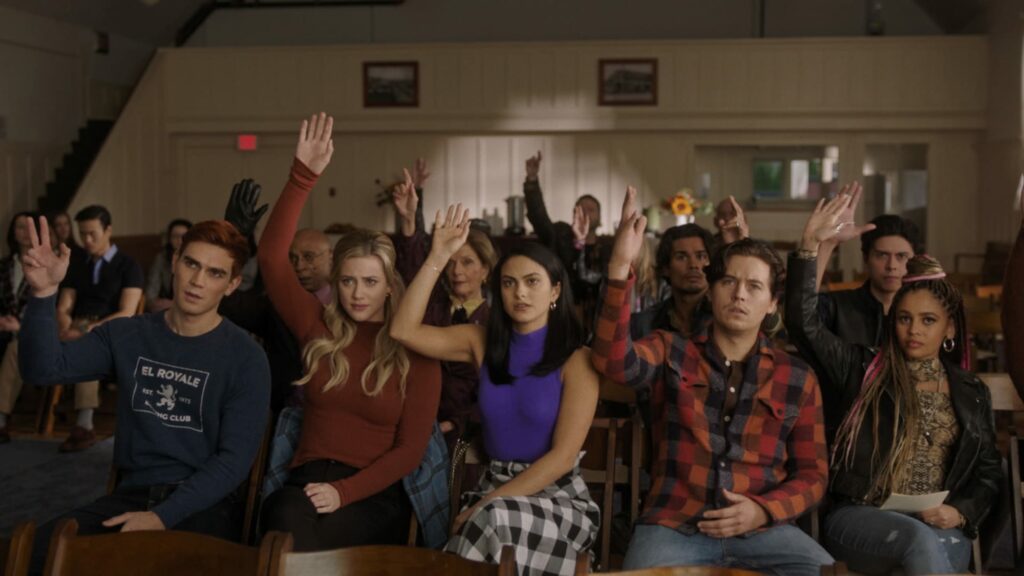 Soon there will be new episodes for “Riverdale” Season 5 and the new trailer doesn’t bode well: Will Betty soon become a murderer? Who does Veronica kiss if not Archie? AND what happens to Jughead again ?!

It won’t be long before we can watch Riverdale Season 5 again! After the new episodes were repeatedly postponed, we have known since April that the second half of the popular series will start on August 11th in America. We’ll be able to stream the new episodes on Netflix on August 12th. Jow, there is the first trailer for the sequel to “Riverdale” and does it again in itself! Let’s start very obviously: A surprising return has been announced for season 5 and in the trailer, we get a lot of impressions of the comeback: Josie and the Pussycats are back in “Riverdale” and at one point it even looks as if Josie and Kiss sweet pea! By the way, not the only shocking kiss that awaits us in “Riverdale”. But fans are also worried about Betty, it looks like she’s going to be a murderer.

“Riverdale” Is Betty going to be a killer herself in season 5?

Sad news in advance: Those who hoped that Jughead Jones would finally find his peace in “Riverdale” are unfortunately a little wrong. The trailer immediately begins with the words: “I’ve disappeared. Devoured by darkness.” Again we see the series favorite lying on the floor, that certainly doesn’t mean anything good for Jughead. Things also look bad for Jughead (Betty + Jughead). There isn’t a single scene that suggests there will be another chance for the two of them. In return, Dark Betty (that’s how they call Betty’s dark side) seems to be celebrating a violent comeback. In one shocking scene, we see her with a chainsaw and her mother say, “Why don’t you just kill him, Betty? Kill that monster!” Anyway, it looks like she’s on the trail of Polly’s possible murderer. It looks difficult for Archie Andrews and Veronica Lodge too. The couple has only just got together, but in the trailer, we only see a little hug from the dream couple. Otherwise, Veronica tries to persuade her ex Reggie to become one of the good guys again and not kiss her redhead in the car, but another guy! In the comments, fans are betting on Chad or Reggie. Is this really the end of Varchie in “Riverdale” or is it part of Archie and Veronica’s plan of revenge against their ex-husband and father Hiram Lodge?

ALSO, READ: Ariana Grande Is Having A Concert On Fortnite! Here’s The Date!

We get some pretty clear signals for that: Toni Topaz’s baby is finally here. Hiram Lodge shoots someone. Cheryl Blossom is apparently still with Minerva – fans hate that – and Cheryl teamed up with her mom and opened a ministry. Many viewers had actually hoped that the time of the weirder mysteries was over, but that will probably not be the case, because there are also clips of aliens in “Riverdale”. So the rest of Season 5 seems to be full of mysteries as well. We are very excited to see what will soon await us in the grand season finale. The summary of the first new episode of “Riverdale” reveals a lot: After the mass breakout in the Hiram Lodge prison, Archie Andrews tries to round up the rest of the prisoners. Tabitha worries that Jughead has disappeared and asks Betty for help. Cheryl Blossom isn’t sure her mother’s intentions are really good.