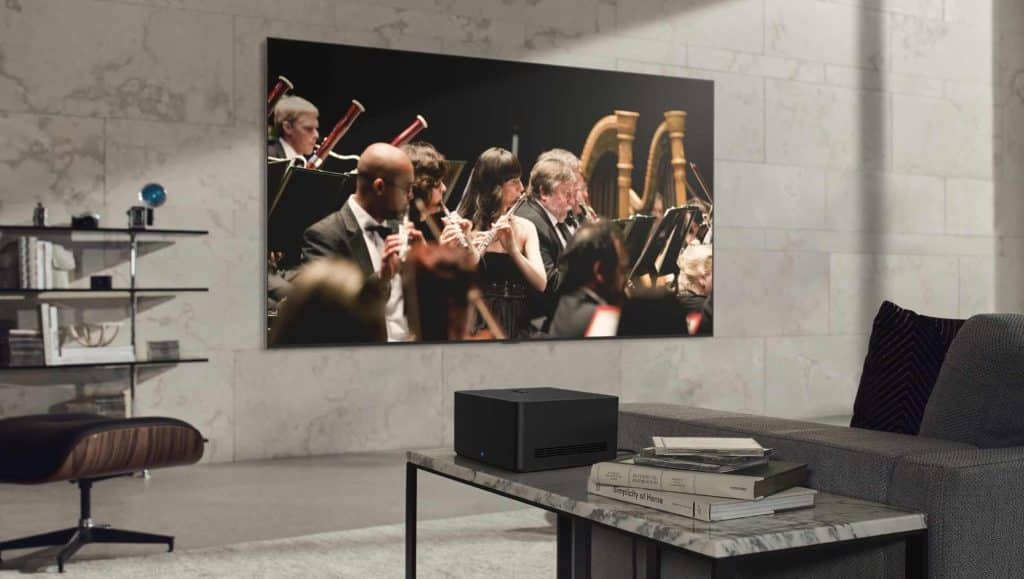 In addition to the new OLED TV line-up including the C3 and G3 series, LG is introducing a premium model. The LG M3 OLED television is a so-called Signature television, which means that unique innovations have been applied. The Signature M3 is a very slim television for the wall, with a Zero Connect box that wirelessly sends image and audio to the television. LG has equipped the M3 with a 97-inch OLED panel, similar to that of the 97-inch G3 series. However, that also means that the TV is not equipped with the latest generation of WOLED panel, as this is currently only available in 55-inch, 65-inch and 77-inch formats. The 97-inch screen can be mounted on the wall using the integrated bracket. hung without leaving a gap between the wall and the TV. However, you can also purchase an optional stand for placement on the floor. The screen itself is only equipped with speakers and a wireless module, so that a few millimeters of the thickness could be shaved off again.The Zero Connect is a device that must be placed within 30 meters of the TV and communicates wirelessly with the TV. This is possible in a quality of up to 4K/120 and, according to LG, without loss of quality due to special algorithms. All peripherals such as media players and decoders are connected to the Zero Connect. Of course, both the TV and the box must be supplied with power, which is still done through a cable. When the Signature M3 should appear on the market exactly and what must be paid for it is still unclear, but there is a good chance that this will be done towards the 25,000 euros that had to be deposited last year for the 97-inch G2 series.